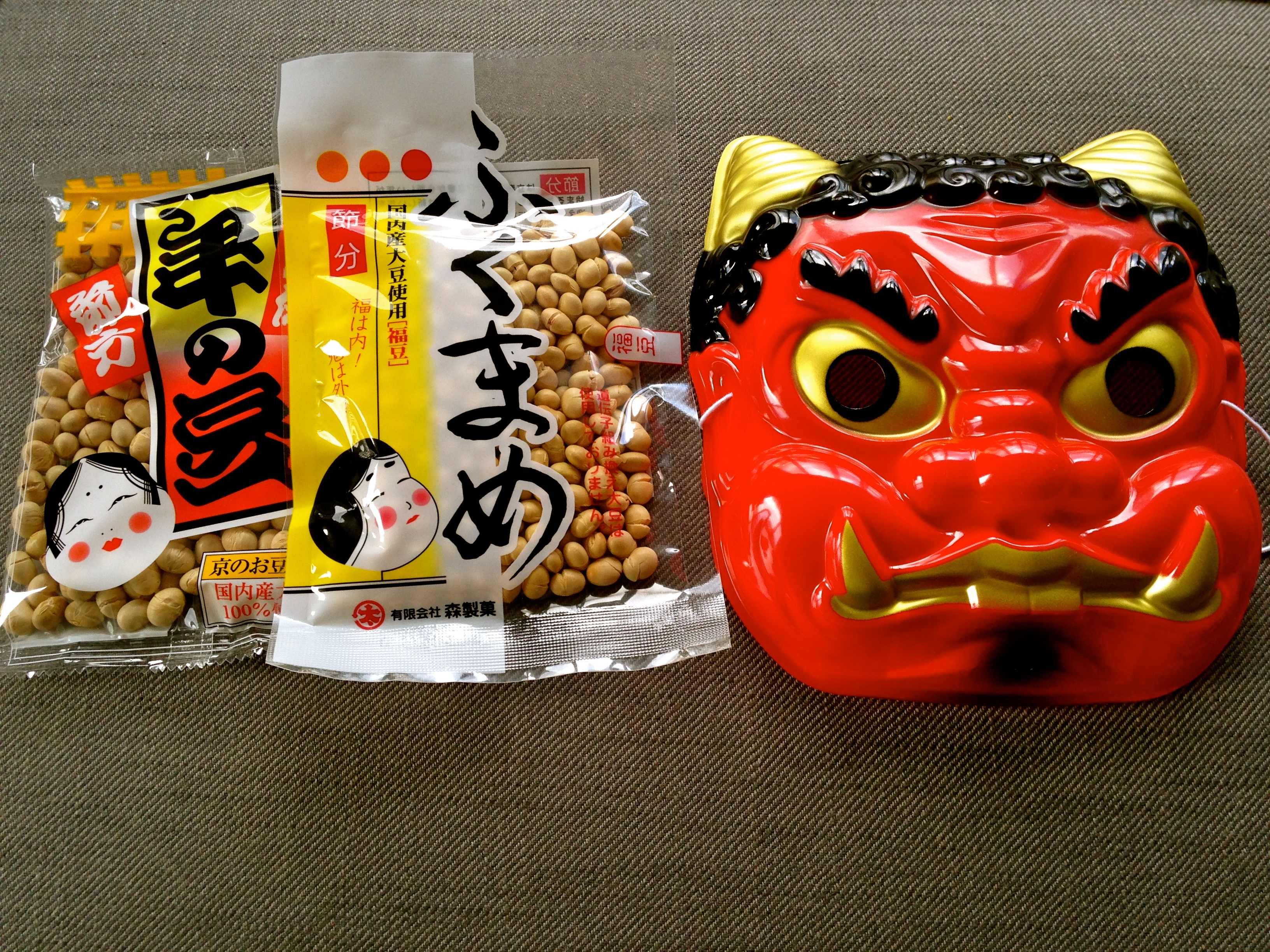 I was a demon 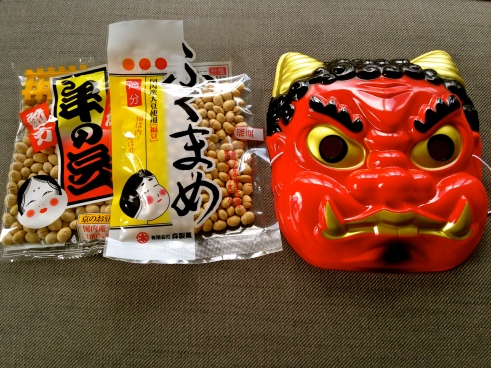 Day before yesterday, 3rd Feb, Japan celebrated Setsubun – the ‘start of the spring’-festival. That is, yesterday was supposedly the first day of spring. It’s +3 degrees outside (8am), so it doesn’t exactly feel like spring.

I hope ‘spring’ doesn’t mean that my workplace will turn off the heating – this is something that is extremely is common in England. Individuals and organisations in England tend to go by the date rather than the actual weather when determining whether air conditioning/heating is needed. My Finnish brain thinks this practice is as logical as a flat chested late developing girl starting to wear a bra at the age of 11 (which is the average age a British girl buys her first bra) rather than at the age of 14, when she might actually need one. Or for an early developing girl, who needs a bra at the age of 9 to wait for two years to buy one.  (I lived in England for 14 years, and I obviously still can’t think like an Englishman. Sigh.)

But about yesterday’s spring festival – the tradition at least here in the Kansai region of Japan is to have mamemaki ‘the throwing of roasted soybeans’ whose purpose is to drive demons out of people’s homes and welcome luck and happiness in their lives for the forthcoming year. This is combined with some additional superstitious practices deriving from the zodiac tradition.

I am not superstitious. I don’t even read my horoscope –  I am not interested in hearing whether ‘my hard work will pay off within the next month’ or ‘something will happen today’. My hard work usually does pay off within the next months and something will definitely happen today. If horoscopes were more precise and, for instance, said something like: Go and say ‘I love you’ to your husband at 7.25pm today and on your next birthday he will give you full-body liposuction as a present I’d be much more interested in giving horoscopes the benefit of the doubt. But I haven’t come across a horoscope like that so far – at least not one that would have given accurate predictions. After all, I am still waiting for that liposuction birthday present.

Even though I don’t know the ins and outs of the zodiac system, we decided to celebrate Setsubun at home like many Japanese families do. Partly because (a) it was our first 3rd Feb in Japan and we want to fully experience the Japanese culture, and partly because (b) I simply thought that our two children, our au pair and I would enjoy the shenanigans.

So, last week I bought a demon’s mask, some roasted soybeans, a kids’ compass (see photos above and below). All supermarkets or even corner shops were prepared with a display of mamemake merchandise (see a photo of one relatively puny supermarket display below). 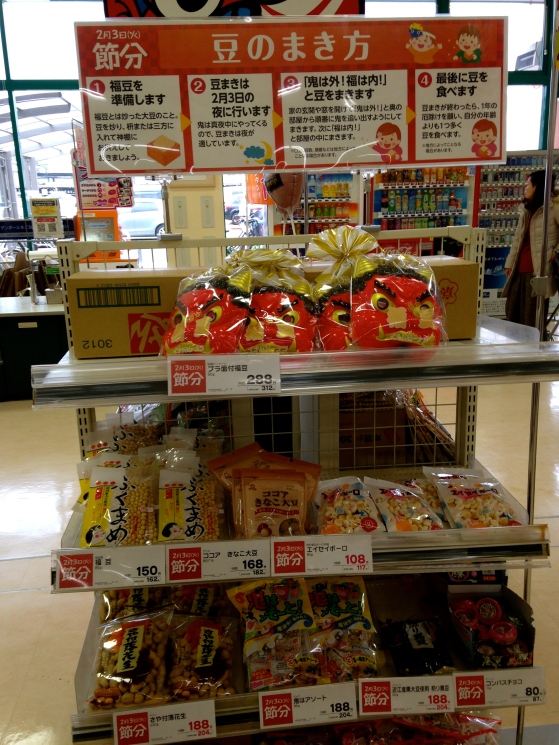 The 3rd Feb was not only Setsubun but it was also the last day of the academic year at the university where I work, so even though I didn’t have classes, I was scheduled to go into work for the afternoon.

While I was choosing the sushi rolls in FamilyMart, my daughter was sitting in her pushchair. I bought four rolls and rushed out of the shop (to make it to work for a meeting in the afternoon). On the way back home I was chatting to my daughter about what we might have on the menu when we got back home and had lunch. She said that she was going to have some bananas. I said that I wasn’t sure if we had any. My daughter asserts that we do. I started a reply with ‘Darling I am not sure…’ and saw a bunch of bananas and a corn on the cob on her lap in the pushchair. She had sneaked them out from the bloody FamilyMart! I was short of time as it was, but I turned back and we returned to FamilyMart. I really didn’t fancy confronting the shop assistant and trying to explain why we had left the shop with an unpaid bunch of bananas and a corn on the cob with my practically zero Japanese skills. A daughter’s desire to have bananas and corn on the cob for lunch is a crap reason to be extradited (which is probably what would happen if you are caught shop-lifting in Japan). So, instead, between the shelves, as non-suspiciously as possible I pulled the bananas and corn on the cob from my screaming daughter’s grip, threw them on the nearest shelf, and escaped the shop unharmed. I suppose an easier thing would have been just to go and pay for the bananas and the corn, but it didn’t occur to me at the time. Perhaps my cognitive functioning isn’t poor only when I am tired (see my earlier blog post: ‘Me myself and jet lag‘). Perhaps this is just how my brain works.

After I had been to a quick afternoon at work, we started the celebration with mamemaki. This involves one person wearing a demon’s mask (usually the father or a male member of the family) and the others throwing roasted soybeans at the demon and driving him out of the apartment. But because my husband is currently in England, guess who in our celebrations had to be the demon. I bravely put on the demon mask while my 3-year-old daughter was screaming: ‘Let’s kill the demon!’ (see photos below). The kids had a bowl of beans each and soon I was showering in a spray of soybeans. I am actually happy that it was me and not my husband, who had the ‘honour’ of being the demon because the beans were actually pretty hard. They would have probably drawn blood from my husband’s hairless head.

The kids managed to drive the demon out of the apartment into the corridor while shouting: Oni wa soto! Fuku wa uchi! (Demon out! Luck in!), something my son had practiced in his Japanese lessons. Luckily they didn’t manage to kill the demon! This ritual is to symbolically get rid of all evil, decease and misfortune from the previous year and to welcome good health and luck for the current year. 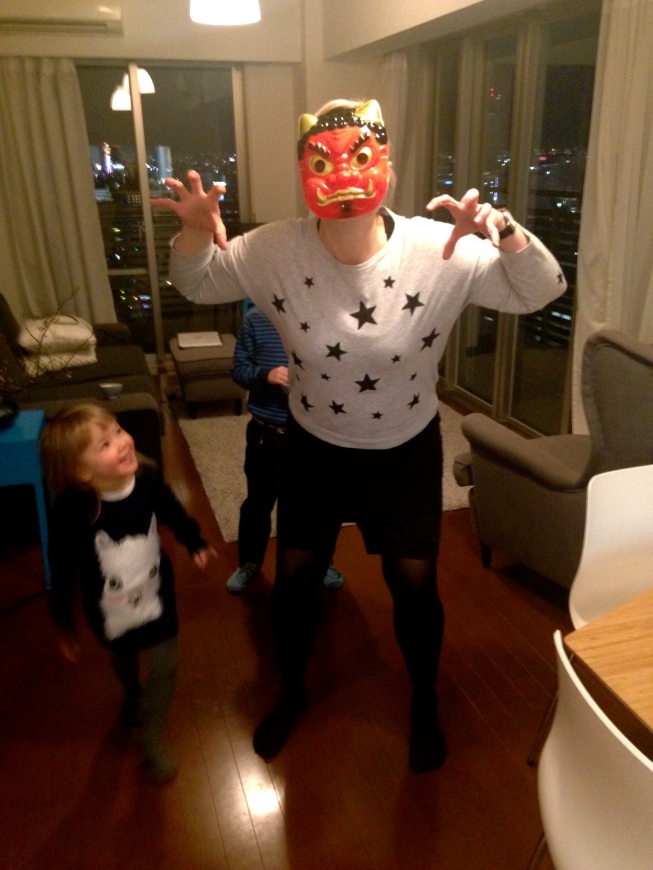 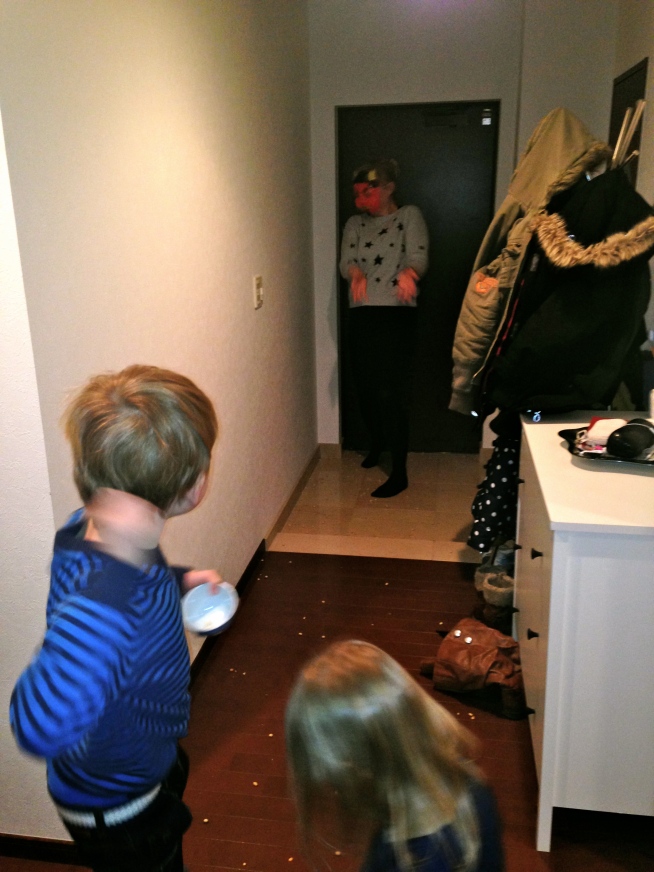 Perhaps we had got a bit carried away but there were soybeans everywhere! (see photo) I’m sure we’ll find some beans under furniture, in shoes and jacket pockets still months to come – a bit like we still occasionally find the hairs of our two Dalmatians who were put down (at the age of 15 and 16 years) about 5 years ago.

In addition to throwing soybeans, it is also customary to eat them (not off the floor but from a fresh bag). More specifically, you should eat as many beans as there are years in your age. In my case, this meant 40. I have never been more desperate to be 3 again, than when I was trying to force those forty dried beans as tasty as pieces of cardboard down my throat. And the question ‘How do 90-year olds do it?’ kept me awake half the night. Don’t get me wrong – I loooove soybeans (edamame) but only if they are steamed or boiled. In fact, I would go as far as to confess that I have at least a bag of edamame a day, but the roasted version, in my opinion, is only suitable for throwing at demons. 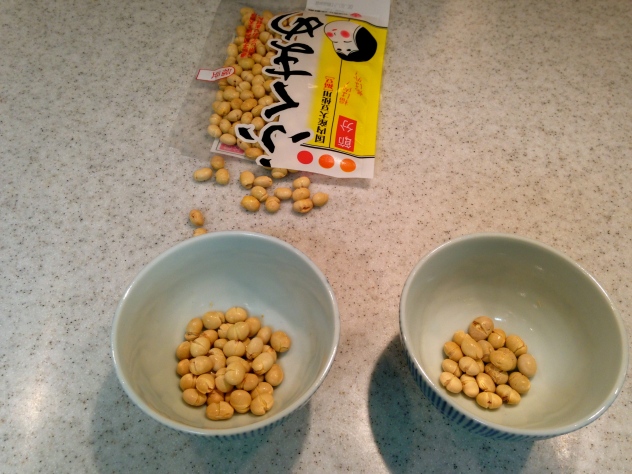 In fact, our au pair felt similarly to me about the beans. She had the misfortune of turning 20 on 3rd of Feb. I bet she was gutted that she didn’t turn 20 the following day just so that she didn’t have to have that extra bean.

After we had had our roasted beans, we had our lucky direction rolls. This year the lucky direction is west-south-west. To clarify, west-south-west is not just ‘south-west’. If you didn’t’ know this already, the Japanese are masters of preciseness and absolute accurateness. For instance, Japanese satnavs giving directions in English are extremely confusing because they point out every little bend in the road and alarm you with ‘bear right/left’ where the road is pretty much straight. Therefore, it doesn’t come as a surprise to me that a simple south-west is not accurate enough, but that the lucky direction in the Japanese system (presumably modeled according on the zodiac system) has entries even between cardinal directions and the mid-points between them. To make this clear, ‘west-south-west’ is between west and south-west.

In any case, we stood there in our living room with a kids’ compass (see photo) trying to aim towards the correct direction. We were worried that our year would be unlucky if we were slightly off because the cheap (60pence) compass might point to a completely wrong direction, like the North! I’ve been told that North is never the ‘lucky direction’. The reason being that in Japan North is construed as the Devil’s direction. It is only the dead who are positioned so that their head points towards the North, nobody else. So I took out my phone and used Google maps to orientate us to the correct direction. 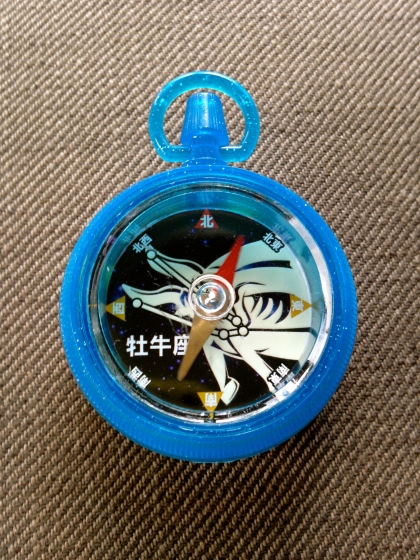 We stood there facing west-south-west eating our sushi rolls in silence for about 10 seconds, until my 3-year of daughter declared that the roll tasted bitter and refused to eat it. My 7-year old was whispering to her to be quiet and reminded her that she’ll have bad luck if she didn’t stop talking. The 3-year old couldn’t care less. She started running around with some demon buns (see photo below) that I had bought for us as a dessert whining that she wants to have those for dinner. 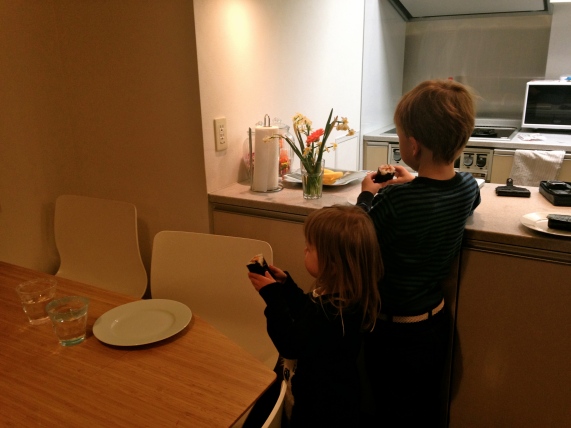 Eating the lucky direction roll, slightly off the mark but at least not facing North.

Luckily, I don’t believe in Setsubun type of superstitious malarkey – otherwise I would have spent the second half of the night worrying whether my daughter was going to have a really unlucky year ahead of her. Instead, we drowned any gloomy thoughts about Devils, demons or misfortune by tucking into some delicious demon buns and had some strawberry cake.

Click links below to read my most popular blog posts